For Intrepid Group, becoming a B Corp is not only their official pledge to be a responsible business, but also a way to use travel as a force for good in the world. In this blog, Intrepid Group share their story and tell us how they are investing in solutions to address climate change. We are really excited to have them on board as a Principal Partner of Champions Retreat! 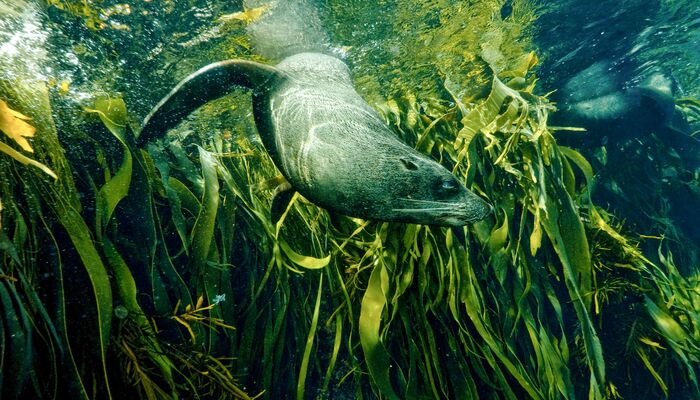 Often considered a nuisance to swimmers, surfers and some beachgoers, seaweed could actually be an unexpected solution to help our warming planet. But why does it matter to a travel company? Allow us to explain.

Since our early days, purpose has been at the heart of what we do. In 2018, we celebrated becoming a certified B Corp, making us the largest in the travel sector globally. For us, this means taking all the work we’ve already done – like becoming the world’s largest carbon-neutral travel company in 2010 – to the next level.

Part of our commitment plan is creating a climate positive company in 2020. This means creating environmental benefits by removing additional carbon dioxide from the atmosphere and decarbonizing our business by reducing emissions from our trips and global operations. A huge part of this is investing in research and innovative solutions – like marine permaculture – and it’s happening in our very own backyard.

Underwater thickets of deep green fronds used to be strongholds of biodiversity off Australia’s coastlines, but warming oceans have left only five per cent of the iconic giant kelp forests intact along the eastern coast of Tasmania. As it grows, carbon gets pulled out of the ocean and stored in the seaweed, which also helps to deacidify the seawater within these underwater forests. And the more that’s pulled from the ocean, the more can be taken out of the atmosphere. Additionally, marine permaculture technology can help pump cooler ocean water to the surface to help the kelp even further.

In April 2019, The Intrepid Foundation partnered with The Climate Foundation to fund early research by the University of Tasmania into kelp aquaculture and Australia’s first marine permaculture platform. As word travelled around the world – and more people saw the technology featured in the film 2040 – we reached our fundraising goal of AU $350,000 in just four months.

To continue the project’s success, we set a new goal (that we’ve since achieved) to raise an additional AU $250,000 to conduct the science needed to scale the project and safely trial a marine permaculture system further offshore in Tasmania’s Storm Bay – just a short distance from the site of the Champions Retreat in 2020. It’s not just a step for the climate; it’s a step for sustainable, environmentally positive aquaculture, local livelihoods and tourism.

Who would have thought seaweed could be the unlikely hero of climate change?

Thanks to Intrepid Group, the 2020 Champions Retreat is carbon neutral.